The New York Yankees are one game away from breaking out the brooms against the Boston Red Sox after an eighth-inning rally on Saturday. New York loaded the bases in the top half of the frame, and Giancarlo Stanton sent a ball into Lansdowne Street to silence the Fenway faithful.

Stanton’s grand slam gave the Yankees a 5-2 lead, and the Red Sox could not respond. The American League Wild Card race is now tied with Sunday night’s contest set to break the gridlock.

The Red Sox were holding on by a thread to their one-run lead throughout the game, but it was apparent the Yankees were going to rally.

The Red Sox survived a scare in the seventh when Tanner Houck entered the game, but if you give good teams multiple chances, they will make you pay. This is exactly what the Yankees did in the eighth. 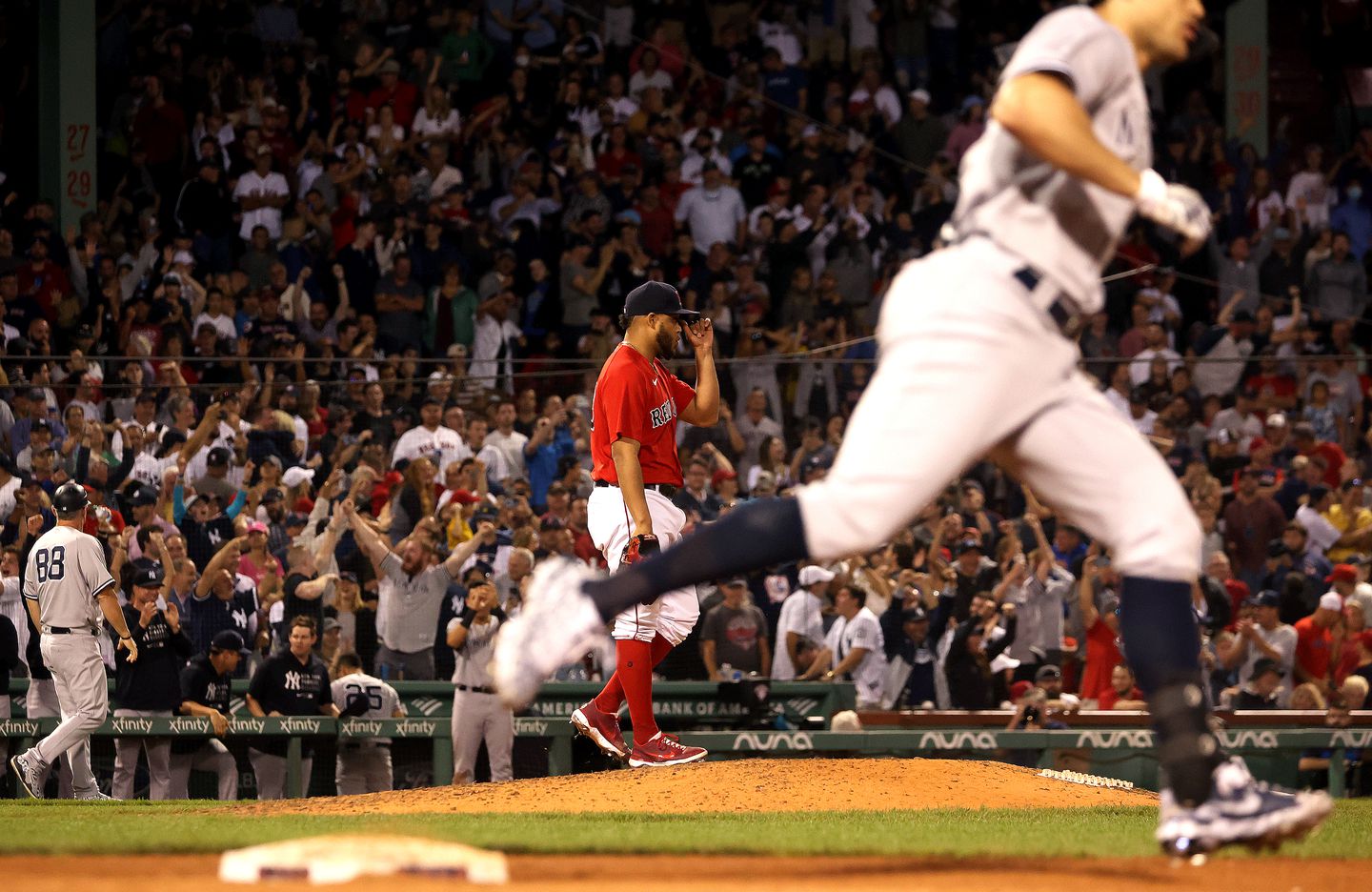 Houck stayed on the mound in the eighth and issued two-out walks to Brett Gardner and Aaron Judge. This made Alex Cora head to the bullpen and call Darwinzon Hernandez‘s number.

Hernandez entered the game in a difficult situation, but his job was to throw strikes, and he failed. Hernandez hit Anthony Rizzo with a pitch to walk the bases loaded. The wing had no choice but to throw Stanton a fastball, and the 94-mph pitch sailed over the Green Monster.

Alex Cora did not give many comments after the game. This display showed his mindset is already onto Sunday’s primetime ESPN matchup.

“We just have two good teams. They’re fighting for the same thing, and they get the best out of each other.”

Credit to the Yankees

The Red Sox were not defeated by the Yankees. Boston gave New York the game, but the Yankees deserve credit because they took advantage of the mistakes. However, the Red Sox should not feel good tonight because they are pumping life into a New York club that was just deflated a week ago.

The Wild Card does not have a home at the moment, but it will have a tentative location after Sunday’s competition. The Yankees are streaking with five straight wins, while the Red Sox are trending downward.

If Boston wins the series finale, they will host the Wild Card at Fenway Park. The combination of their remaining schedule with the Yankees gives them a massive advantage over their rivals. Nevertheless, New York is hot at the moment, and it does not appear they will slow down.

Additionally, they will have a massive advantage on the bump on Sunday night with Jordan Montgomery facing Eduardo Rodriguez. They also have a lot of confidence which could be the most dangerous quality in sports.

The game’s MVP, Stanton, exuded the confidence that is being spread throughout New York’s clubhouse.

“I’d say for sure. Given what’s at stake — we all know what it is. We’re in a better situation than we were yesterday and the day before. Now it’s our job to get out of here in an even better situation.”

The 2021 Red Sox have been through a lot this season, but the biggest challenge will occur on Sunday night. Great teams find a way to win with their backs against the wall. Are the Red Sox great? I will have an answer for you tomorrow night.

When Rafael Devers calls game, he means it.  […]