Mac Jones and the Patriots were driving down the field in the final minutes to beat the Dolphins, but Damien Harris coughed up the ball on the 11-yard line with 3:18 remaining. Miami took the ball back and drained the clock over eight plays to win the game. 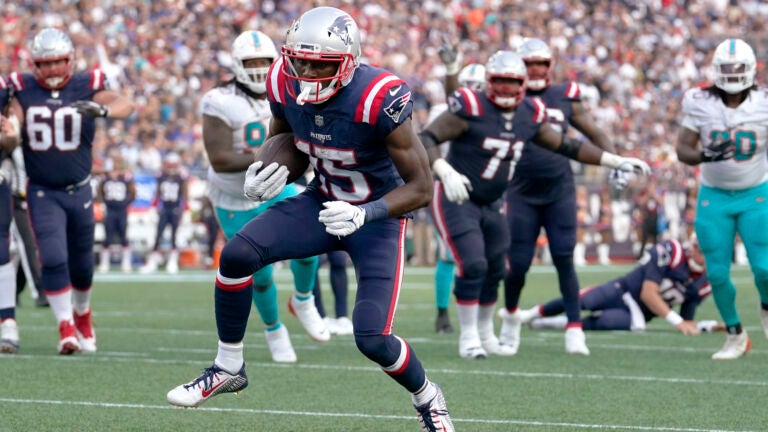 Football does not come down to one play, so Harris may be blamed, but there are plenty of areas where the team needs to improve. Nevertheless, there were multiple positives throughout the afternoon, mainly surrounding rookie quarterback Mac Jones.

Mac Jones was electric in the pocket, displaying exactly what we expected from the rookie quarterback. He was efficient and led his offense with command and poise.

He finished the day 29 of 39 for 281 yards and one touchdown. The offensive line did a nice job throughout the game keeping him upright as Jones was only sacked once for a 13-yard loss.

Jones’ accuracy was impressive, but his leadership stood out as a spectator. This was evident on the sidelines and in the postgame press conference. After Harris fumbled, Jones ran to the sideline to encourage his defense to get a stop.

The unit was unable to capitalize, but this attitude is still a testament to the rookie in his first professional start. Another great moment came after Jones threw the first touchdown of his promising career.

His teammates were trying to give him the ball as he jogged off the field and did not want any part of the pigskin. When asked about it after the game, Jones responded with shades of Bill Belichick and Nick Saban.

“I didn’t want it because we need to score more touchdowns. We need to be better.”

This attitude was evident throughout his entire slate of postgame remarks. With this mindset, New England will be winning more than times than not as the team improves.

Jones looked special in the pocket, but his receivers contributed to the success. The tight end duo of Jonnu Smith and Hunter Henry showed shades of the Gronkowski/Hernandez days. The two combined for eight receptions for 53 yards with multiple explosive plays.

Nelson Agholor led the team in receiving, hauling in five receptions for 72 yards and Jones’ sole touchdown pass on Sunday. James White and Jakobi Meyers each caught six passes for 49 and 44 yards, respectively.

The Patriots need to be better in all phases of the game, but this is a game that can be used to build on for the remainder of the season. When Belichick corrects the mistakes, New England is going to be a force in the AFC East.

The Patriots will travel to Gillette Stadium on Sunday for their first road test of the year.

The Patriots will continue divisional play this weekend against Zach Wilson and the New York Jets. […]

The Boston Red Sox are 3-0 at home in this year’s playoffs, with the Astros coming to town for three ALCS games beginning on Monday. […]